You are here: Home / Catholic Q&A / The Catholic Bible vs The Christian Bible 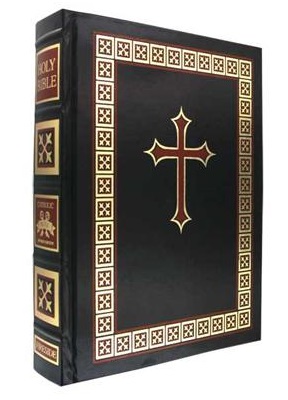 The modern bible is not just one book, but many books, stories and historical events that have been compiled into a single volume. These books come from both the Old Testament and the New Testament alike.

In the late 4th century, these books, and scriptures, were compiled into a single volume. The Protestant and the Catholic bibles are different from one another today. As the Catholic version includes seven books that the Protestant bible does not acknowledge.

The between 200 B.C. and 100 B.C. the original version of the bible was transcribed from the Greek translations of the Hebrew Scripture, and was known as the Septuagint.

This text was questioned by St. Jerome when he translated the original Hebrew scripture into Latin during the 380’s A.D. He believed that the Septuagint included inauthentic books, that would become known as the seven books of the Apocrypha.

There are no differences between the Catholic, Orthodox and Protestant bibles when they cover the New Testament content. The New Testament is about the life of Jesus, his apostles and their lives following the crucifixion of Jesus Christ.

All twenty-seven books in the New Testament are included in the Catholic, Orthodox and Protestant versions of the Bible.

How the Bibles Diverted

During the 1500’s, Martin Luther broke away from the Catholic Church and embraced St. Jerome’s argument, and lead the Protestant Reformation, with the return to the original Hebrew scripture and away from the Greek translation. They only acknowledged 39 of the Old Testament books and refused to accept the seven books of Apocrypha as gospel.

This division is what has led to the core differences between Catholics and Protestants. Catholics view the word of the church, as having just as much, if not more authority then the words of the bible. While Protestants only acknowledge the word of God written in the Bible as having any authority over men.

The seven books of Apocrypha are also known as the books of Deuterocanonical  scripture by Catholics, and have remained within their version of the bible. Meaning that the Catholic bible contains 73 books in total, as apposed to the Protestant’s 66 books.

It is from these books of Deuterocanonical scripture, that Catholics derive their belief in purgatory. That praying for the dead can influence the souls of the dead, and that doing good works will please God.

Protestants on the other hand, do not acknowledge the seven books of Apocrypha. Most do not accept the existence of purgatory, nor that praying for the dead has any influence on their souls what so ever. They also believe that it’s God’s grace regardless of a persons life or works, that leads to eternal life.

Book Contained Within the Bibles

The following table has a list of the books from the Old and New Testaments (that are found in the Catholic and Protestant bibles).