You are here: Home / Catholic Q&A / Who Were The Three Wise Men? 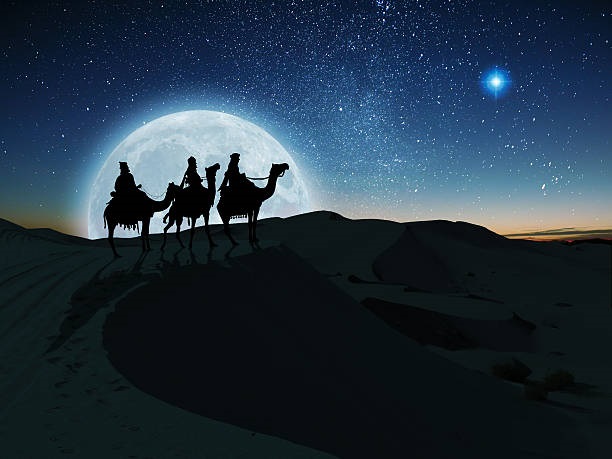 When it comes to The Three Wise Men there are many conflicting beliefs and ideas as to who they were and where they came from. As well as the star that they followed or when they arrived in Bethlehem.

Throughout history the details of events have changed over time.

This can occur due to misinterpretations, translation errors or thanks to an embellishment done to spice up the tale.

An example of this would be the lost city of Pompeii, a city long though to be nothing more then a legend told to depict the furry of the Roman Pantheons.

A city that was proven to be real. When it was first rediscovered in 1599 and then again in 1748.

In this article we will be looking at the more plausible explanations as to who the three wise men were.

How Many Wise Men Were There

Sometimes referred to as The Three Magi or The Three Wise Kings.

The bible is actually rather silent over the matter of who they were, or how many of them were there.

It is commonly accepted among the western branches of Christianity, that there were only three men.

This is based solely on the numbers of gifts presented.

Many Eastern branches of Christianity has their numbers at twelve or more.

The Eastern interpretations could go towards explaining why they are sometimes referred to as the three wise kings.

The fact is, that both interpretations could actually be considered true.

It would be safe to assume that the three men that presented baby Jesus with the gifts, were either the leaders of the group(s).

Or they were the ones bestowed with the honor, and responsibility of carrying and presenting the offerings.

One thing that we do know for certain, was that three gifts were presented.

Where Did The Three Wise Men Come From

The Three Wise Men were members of an order of Persian priestly-astrologers known as Magi, that would study and interpret the stars.

The Magi as a whole, in particular the the wise men mentioned in the bible. Can rightly be considered among the first Christians

The term Magi itself had several meanings:

What Where Their Names

The names of the three wise men mentioned in the bible never had their names reviled in the New Testament.

Traditions and legends however identify the men as:

Though they arrived from Persia collectively. They individually originated from different nations, with Caspar being said to have come from the Indo-Parthian Kingdom.

This would mean that their actual race or ethnicity will remain unknown, and the actual identifications of to the wise men are heavily based on speculation.

How Did The Magi Know What Star To Look For

To this day there has been many debates as to which star signaled the birth of Jesus Christ, and had guided the wise men to him.

Some believe it to have been Jupiter or Mars, or perhaps an alignment of the planets.

Others a shooting star that crossed the heavens or one that cut across the moon while it was either a full moon or a new moon.

Either of which would not be remarkable enough on their own to stand out.

The star would also need to be something that was not visible in Bethlehem at the time.

The birth of Jesus was unknown to the people of Bethlehem prior to the arrival of the Magi.

One theory that makes the most sense would be based on the star’s movement itself.

Celestial stars move across the sky from East to West and it never changes.

The star that the Magi followed moved North across the night sky.

This would have stood out most to these biblical astrologers, and would have be seen as the sign that herald the birth of the Messiah.

As only a miracle could produce a star that traveled north, they would have followed it until it settled over Bethlehem.

Were They There At Jesus’s Birth?

It is a common misconception that the wise men were present at the birth of Jesus Christ.

This belief has been brought about thanks, to nativity scenes consistently depicting them being around his manger along with the shepherds and their flock.

This is not the case however, as the wise men arrived in Bethlehem days, weeks, months or possibly even years later.

As stated in Matthew 2:1, the wise men visited Jesus Christ in a house, not in a stable.

The Significance Behind The Gifts

The three gifts presented to Jesus Christ carry more meaning then what merely appears on the surface.

Giving Myrrh may appear to be an offensive gesture but Jesus’s life was foretold throughout the old text, and the Magi were more then aware of his importance to use.