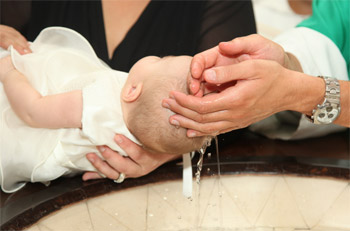 Catholics, much like most of the “mainline” Protestant denominations – Anglicans, Lutherans, Presbyterians, Methodists, Congregationalists and other Reformed denominations, such as the Moravian Church -, baptize their infants. This is a tradition that was established by the first Christians themselves.

For Jesus said “Let the children come to me; do not prevent them, for the kingdom of God belongs to such as these” (Mk 10:14)

As Jesus also answered Nicodemus, “Very truly I tell you, no one can enter the kingdom of God unless they are born of water and the Spirit” (John 3:5)

Unfortunately, this does mean that those practicing infant baptism, are in contrast to the beliefs of other Christian denominations, namely Baptists and their Evangelical denominations. Just like so many other religious hot topics, there are some who feel the need to get into heated debates with those of a differing opinion. While this may sound like it would be more of a modern day debate, at its core, this debate has been raging on for the better part of the last 200 years or so.

None of the Fathers or Councils of the Church, have deemed the practice of infant baptism to be contrary to Scripture. Traditionally it has been encouraged, as it has been viewed as being both a customary and an appropriate practice that has been performed since the early days of the Church.

Even so, among some Catholic communities today, the practice of baptizing infants is beginning to be viewed as somewhat of a taboo. This is namely due to interpretations of the text. No where in the bible does it explicitly state that infants should or shouldn’t be baptized. Instead many verses regarding baptism can be interpreted as being both for or exclusive of infant baptism.

The main drive behind this push, lies within the fundamental belief that all Christians share, “Faith in Christ is necessary for salvation.” Loosely interpreted, this means that infants can neither obey his orders and teachings, nor accepted Jesus Christ as their personal Lord and Savior.

The historic Christian Church has always held the view that Christ’s laws also apply to infants as well as adults, given the aforementioned (John 3:5). This left many of the early Christians in a bind.

If baptism requires faith, and young children are incapable of having faith up until the age of reason (around 12 years of age, 7 in the early days), and yet heaven is only for those who have been baptized and born again. How are we to save our children from the flames of hell, or the torment of purgatory?

Fundamentalist, and many of the orthodox Christian faiths, have opted to believe that infants and children that have yet to reach the age of reason, are in fact exempt from Christ’s Laws. This is a belief, not a fact, and just as there are verses that can be interpreted to support this belief, there are just as many that can be interpreted otherwise, with some supporting verses also being interpreted differently.

For many Catholics, baptism is instrumental in assuring the salvation of their children. Up until they reach the age of reason, and until they are able to undertake their Sacrament of Confirmation, the parents of these children pledge to guide and instruct them on the ways and teachings of the Church and Jesus Christ.

As their baptism was a choice made by their parents on their behalf. The child is not acknowledged as a full member of the Catholic community, until they have completed their Confirmation.

If a Catholic child, chooses not to undertake their Confirmation, their baptism is not fully concluded. Once of age, they are not guaranteed a place in heaven until they have been “born again”, and accept Jesus Christ as their personal Lord and Savior.

As you can see, this dispute is mainly over the age of the person being baptized. A Catholic is not required by mandate, to baptize their children as infants. A child who wishes to complete their Sacrament of Confirmation and become a recognized member of the Catholic community, must first be baptized, and have completed their first communion. Older children/young adults may need to complete a Rite of Christian Initiation (RCIA) course to do so, situation pending.

At the end of the day, the choice to baptize your infant is yours alone. Any criticism directed at someone else’s belief regarding the exemption of infants/children with Christ’s Laws and entry into heaven, is not only unfounded, it is also very Un-Christian/Un-Catholic like behavior. Should you have any doubts and concerns over the matter, consult with your local priest or bishop. Though they may try to convince you to have your infant(s) baptized, they will be able to at least give you information on baptizing your children later on in life, should you leave the choice up to your offspring.

Here are a few of the verses that have spurred this debate:

Therefore go and make disciples of all nations, baptizing them in the name of the Father and of the Son and of the Holy Spirit, and teaching them to obey everything I have commanded you. And surely I am with you always, to the very end of the age.

People were also bringing babies to Jesus for him to place his hands on them. When the disciples saw this, they rebuked them. But Jesus called the children to him and said, “Let the little children come to me, and do not hinder them, for the kingdom of God belongs to such as these.

Jesus replied, “Very truly I tell you, no one can see the kingdom of God unless they are born again.”

“How can someone be born when they are old?” Nicodemus asked. “Surely they cannot enter a second time into their mother’s womb to be born!”

Jesus answered, “Very truly I tell you, no one can enter the kingdom of God unless they are born of water and the Spirit. Flesh gives birth to flesh, but the Spirit gives birth to spirit. You should not be surprised at my saying, ‘You  must be born again.’ The wind blows wherever it pleases. You hear its sound, but you cannot tell where it comes from or where it is going. So it is with everyone born of the Spirit.”

Peter Replied “Repent and be baptized, every one of you, in the name of Jesus Christ for the forgiveness of your sins. And you will receive the gift of the Holy Spirit. The promise is for you and your children and for all who are far off—for all whom the Lord our God will call”

…to those who were disobedient long ago when God waited patiently in the days of Noah while the ark was being built. In it only a few people, eight in all, were saved through water, and this water symbolizes baptism that now saves you also—not the removal of dirt from the body but the pledge of a clear conscience toward God. It saves you by the resurrection of Jesus Christ…

There are several mentions of entire households being baptized within the Bible.

One of those listening was a woman from the city of Thyatira named Lydia, a dealer in purple cloth. She was a worshiper of God. The Lord opened her heart to respond to Paul’s message. When she and the members of her household were baptized, she invited us to her home. “If you consider me a believer in the Lord,” she said, “come and stay at my house.” And she persuaded us.

They replied, “Believe in the Lord Jesus, and you will be saved—you and your household.” Then they spoke the word of the Lord to him and to all the others in his house.  At that hour of the night the jailer took them and washed their wounds; then immediately he and all his household were baptized.

Hippolytus wrote in the Apostolic Tradition, otherwise known as the Egyptian Church Order, about baptizing households or large groups: “Baptize first the children, and if they can speak for themselves let them do so. Otherwise, let their parents or other relatives speak for them”

The Council of Carthage

In 253 A.D. the Council of Carthage, condemned the opinion that baptism should be withheld from infants until the eighth day after birth. Early Christian Church, didn’t argue over whether or not to baptize infants. The argument was over whether or not parents should have to wait a full eight days before baptizing their babies. The members of the Council of Carthage, felt that requiring parents to wait the eight days before baptizing their new born babes, was asking them to wait too long.

We have tried to provide you with enough unbiased information to help you make your own decision on the subject. If you are unable to decide for yourself, it is usually best to air on the side of caution, and abide by your family traditions, or follow your local priest’s advice.

If you have made your choice, and it is in direct contradiction with your families ideals, or you find yourself under attack by members of the community, or even from your own family members for your choice. Then hopefully, we have provided you with enough information to help to stand your ground and to feel confident in your choice.